Posted on June 8, 2015 by Baroness Buttercup 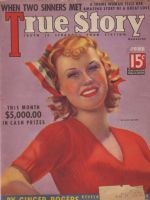 He picked me up and walked into his bedroom. He had a blue light bulb screwed into the light fixture, and his whole room was bathed in a soft, blue light. He laid me down on his bed – a water bed – and laid down beside me.

He kissed me once. “Y’know,” he said. “I’ve got to be honest with you. When I first met you and Paula, I was planning on hitting on her.”

That didn’t surprise me. Paula was so blonde and cute and perky, she looked like the all-American girl, the innocent, virginal cheerleader type. I know I’m not bad looking, but I’m shy and I’ve got this short brown hair and don’t always come across the way I’d like to.

“Then I started to get to know you,” he went on. “I don’t know … Paula’s okay, but she doesn’t seem real. She looks like a Barbie doll. You look European, French or English or something. “He touched my hair, “Maybe it’s the way you wear your hair. When I lit the candles, you looked mysterious. No, that’s not the right word. You just looked like there’s someone inside you I’d like to get to know.”

I never knew how to react when people talked to me like that, so I just laid there and smiled up at him. I guess I didn’t have to say anything because he started kissing me again. God he could kiss good! And that’s all he did for a long time; he kissed my lips, my eyes, my face, my neck, my ears …

The best part was that he didn’t try anything on me. I figured he knew I’d had the wine and the pot and that I would go for anything. But he didn’t try to take advantage of the situation. That’s not to say things didn’t get passionate, they did … extremely. We went through all the motions and did everything we could with our clothes on. That’s what mad it so exciting I guess. The restraint, like an animal in a cage trying to get out, fighting against what holds it back, knowing that freedom and release is just out of reach.

I didn’t know how long we’d been in John’s room, but judging from the crumpled condition of my clothes, I figured it had been quite a while.

“Did you have a good time tonight?”

“I’m trying to catch my breath,” I said.

John smiled and stood up. He helped me off the bed and I dashed to the bathroom to try and repair my face as best I could.

We found Tony and Paula in the kitchen devouring the last of the fruit salad.

“Well, well, well,” Paula said. “We were about to send out a search party.”

“Yeah,” Tony said. “One minute you were there and then you just disappeared … poof!”

“Maybe you were just too busy to see us leave,” I said.

Paula nudged me in the ribs, “Have a good time, Al?”

Tony looked at John and raised his eyebrows as if asking how far he’d gotten.

“We started talking and I guess we just lost track of time,” John said.

“Talking about what?” Paula asked in a tone of disbelief.

John winked at me. “Barbie dolls,” he said.

Paula looked at her watch. “We have to go, Alex. It’s almost three.”

Three o’clock in the morning?! John and I had been in his room for even longer than I thought.

John and Tony walked us out to Paula’s car and said they’d call us later in the week.

John opened my door for me. “You look tired,” he said.

“Yeah. I had fun tonight, but now I just want to get home and get into bed.”

As soon as we were out of their sight, Paula and I each lit cigarettes.

“I have been dying for one of these,” she said.

I took a deep drag of the cigarette, “I know what you mean.”

We drove on for a while and Paula kept looking over at me.

“Tell me what really happened,” she said.

“Nothing, we just talked and kissed and stuff.”

“You were in there for almost two hours, Alex.”

“I swear to God, nothing happened. What happened with you and Tony?”

“You were out there for almost two hours,” I said, mocking her.

“Well, he got a little crazy once, but I told him to calm down and he said he was sorry and then we ate the fruit salad.”

“They seem pretty nice,” I said.

“I wish I would have asked John how old he is, though.”

I took a deep breath. I was tired and not in the mood to play this little guessing game. “He looks about twenty-three.”

“Wrong,” she said. “He’s twenty-eight! Ten years older than you!”

“Swear to God,” Paula insisted. “Tony said that people always thing John is younger than him and Tony’s only twenty-four.”

Twenty-eight! That’s almost 30! I was in 3rd grade when he graduated from high school. We would have made a real interesting couple then …

“What about your dad?”

“Will they let you keep seeing him?”

Like Loading...
This entry was posted in Autobiographical, Based On A True Story, BOATS, Dating, Humor, Lesbian, Terribly Earnest and tagged Age, Date, Dinner, Kiss. Bookmark the permalink.

A 30 somethin' who knows a lot about nothin'. Lifestyle and Life Hacks.

"I do the research so you don't have to!"

Unless They're Really Drunk...Or Feeling Adventurous. A Memoir by a Former Lesbian.